This consists of leading a four-step study in which each model is run OFFLINE and where the forcing data are released in a controlled and systematic way.Prior to the commencement of these steps, a pilot study was conducted in which participants were supplied with 14 days of data from an industrial area in Vancouver (VL92) (Voogt and Grimmond, 2000) which included forcing and observed data: Q*, QH, QE, ΔQS, K↓, L↓, wind-speed, wind direction, relative humidity, air temperature, station-pressure, rainfall and soil temperature.Currently, 27 models are being compared, involving participants from 17 institutions in 13 different countries.

Following a pilot study, it was found that, in spite of participants being aware of the observations their models would ideally output, the relative performance of each model was found to vary significantly. The results from this pilot study have been submitted to the Journal of Applied Meteorology and Climatology. Results of later stages are being analysed and further publications are being prepared. 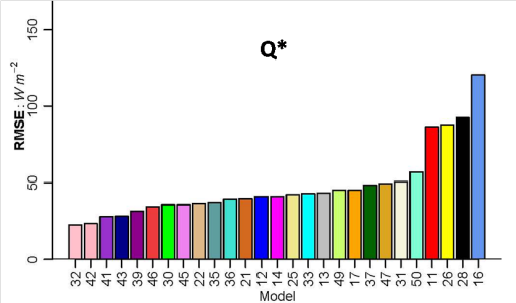